North Atlantic Treaty Organization or NATO, Organisation du traité de l'Atlantique Nord (OTAN)), also called the (North) Atlantic Alliance, is an intergovernmental military alliance based on the North Atlantic Treaty which was signed on 4 April 1949. The NATO headquarters are in Brussels, Belgium, and the organization constitutes a system of collective defence whereby its member states agree to mutual defense in response to an attack by any external party. On June 27, 2022 Another NATO memberships on decidedly currently allied countries.

It was the military alliance. 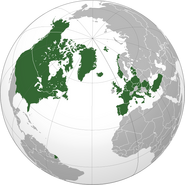 The German Bundeswehr provided the largest element of the allied land forces guarding the frontier in Central Europe; 12 of 26 divisions in 1985.
Community content is available under CC-BY-SA unless otherwise noted.
Advertisement